On the Same Street 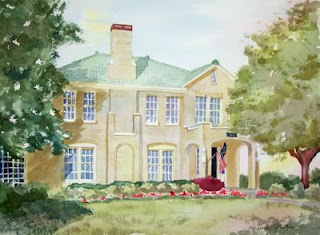 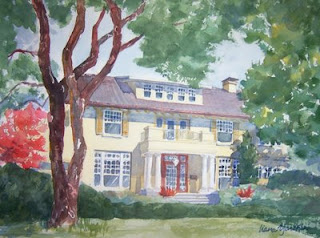 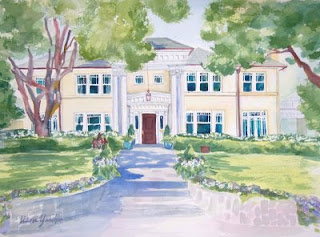 I couldn't wait until after Father's Day to post my latest commission. I was commissioned to paint a home that the family was going to give to the dad for Father's Day framed with a brass plate saying, "The home you provide us." I love doing these surprise paintings. I have to be 'sneaky' when I take the photos of the home to make sure I don't get caught by the gift receiver.
When I went to upload the photo, it turns out I have done 3 houses all on the same street here in historic Highland Park. They are all posted above. All of the homes were built in the 1920's. Each one has a unique story. One of the homes I actually looked at to buy, but, since I was 8 months pregnant and we had just renovated our current 1911 home, my husband didn't take me seriously. Amost a year later, the builder commissioned me to do a painting for the new owners, their client. In another home, the son who now has a family of his own with his children attending the same grade school he did, grew up in that house and his parents still live there. They gave that painting to his parents for their 75th wedding anniversary. They are all homes that have been carefully taken care of and renovated to preserve the architecture and history of not only the home, but of our wonderful neighborhood. A place where the kids walk, scooter, bike to school, play in the creek and have their soccer games in the school yard.
On all of the homes I paint, there is always a story. Their first home, the home they grew up in, the home they didn't want to leave, their dream home, the home they spent their summers, the home that has been torn down. I always love to hear the stories. I don't charge much for these paintings, but it is priceless to hear of the joy and sometimes tears that these home portraits bring to people.
Please let me know if you can recognize these homes and what you think!
Thanks for stopping by. I hope you are staying cool where you are! 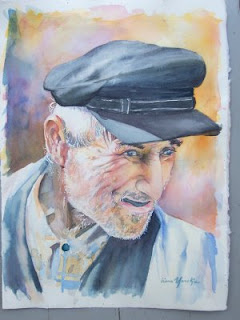 Mr. Parker's Challenge
Interestingly enough, I have learned many new things by bloggging. One is the painting above. Somehow, Jack Parker (http://windowstothewords.blogspot.com/) and I found each other in the blog world. Mr. Parker puts photos on his blog to challenge one to paint, photograph or write in response to the photos he has posted. For June, his challenge was painting old people because Mr. Parker noticed his wrinkles on his face. When I saw the photos, I immediately thought, "not gonna do it, I don't do people, that is for artists that do people." I have never felt the urge or desire to paint a portrait. Of course I have had to try whole figures in various classes. I always would avoid hands, feet and faces! It would pain me when I would get to these parts of the body. I would try but not get very far. I could never make them look realistic. So I have lots of sketches of figures without hands, feet or faces. In any paintings, it is only a figure to represent a person as part of the painting, it is never a person as the subject. Anyhow, I don't know what made me accept the challenge. It's not like I don't have a zillion photos in my waiting to paint pile. Maybe just the fact of having a challenge and maybe needing one?
I started the painting above with one baby step after another. I made the grid and did a value sketch as in my previous post. And then it was time to paint. How scary is that! I held my breath and put down the first washes. I was so scared that I would stop and go about my day (this was Sunday and the whole family was home). After doing a mundane task like making lunch or cleaning the kitchen, I would go back to the painting, hold my breath, add another layer of color and then leave to tend to the family. By the end of the day, it was 90% complete!
When I submitted it to James Parker's blog, I added a comment in response to him noticing his wrinkles. I told him to think of his wrinkles as flower petals. That is how I painted these wrinkles, the same as I know how to paint the petals of a rose.
(Personally, as a woman, I don't think I would ever accept wrinkles happily, I am fighting them every step of the way).
11x14 original watercolor by Liana Yarckin
Posted by Liana Yarckin at 9:49 AM 3 comments:

From photo to watercolor 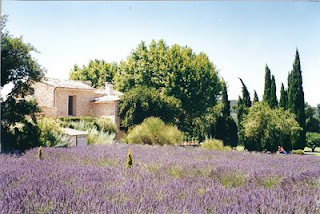 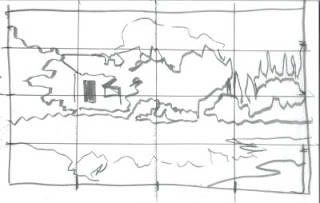 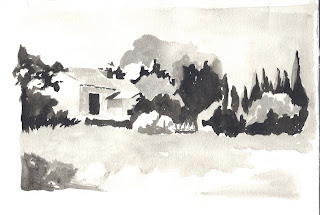 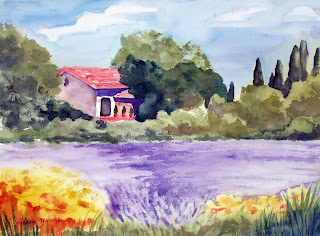 Provence Field
As promised, I am posting some preliminary work to a watercolor. It all starts with a photo. This was a lavender field that we had access to when we stayed in some hotel in Lourmarin on our first trip to France. I will have to look up the hotel name, but they had to die for dinners and an amazing cheese cart. The pool was not on site, so we had to go to this little country house for pool and spa treatments. Just on the other side of those green bushes was the resort style pool. This was the lavender field and off to the left was their vegetable garden in which they grew for their meals. The lavender from this field was used to make lavender honey, lavender cookies and other yummy lavender desserts like creme brulee! We tested it all, and it all was delicous!
Back to painting. When I select a photo to paint from, I make a quick sketch with a grid on it. I use this sketch to find out what I like best about the photo and what I want to leave out of the photo. The grid helps me to accurately locate these items on my watercolor paper which is a larger size.
The next step is the most important step to having a successful painting. A value sketch!!!! I look for my darkest darks and lightest lights and shade those appropriately with a pencil, grey markers or in this case, 3 shades of ink. I then use this value sketch to paint my painting. I may refer to the photo for details, but, I try to keep to the value sketch to highlight the dark and light values in my painting. If your value sketch comes out prettier than your painting, it means that you did not follow your value sketch when painting!
Practice doing value sketches with a piece of fruit. I promise you will find all kinds of interesting shapes and properties about your fruit. Squint your eyes and look for the "darkest darks and the lightest lights", simply those shapes and draw them on your page! Before you know it you will have a beautiful piece of fruit.
(I took years of classes from Naomi Brotherton and she would always refer to the darkest darks, lightest lights).

I encourage everyone to try. It is just a piece of paper. Good luck and all questions welcome.
11x14 original watercolor by Liana Yarckin
$350
Posted by Liana Yarckin at 3:10 PM 2 comments: 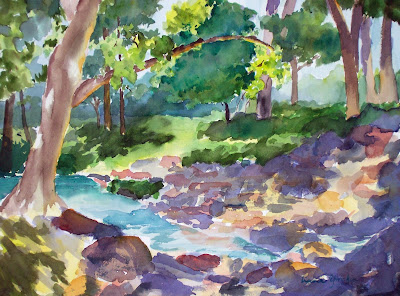 This is the creek across the street from the school. For the last month, everyday after school you will find moms sitting at the edge watching their children play in the creek. The kids have so much fun and never want to leave. Yesterday my kids went on a creek walk with the coach from their school. They find tadpoles and go through tunnels and much more, but, those are the highlights in my kids' eyes.

This painting was done in the plein air style which means to paint in the open air. Most paintings are done inside in a studio. I find that plein air paintings have a more free flow. Plus, it is 100% enjoyable to sit outside and paint with your subject right before your eyes.

Thanks for stopping by!
Posted by Liana Yarckin at 10:37 AM No comments:

Email ThisBlogThis!Share to TwitterShare to FacebookShare to Pinterest
Newer Posts Older Posts Home
Subscribe to: Posts (Atom)
All rights to the paintings are owned by the artist, Liana Yarckin. If you would like to use an image, just ask me. Thanks!
Not only is it lack of integrity to copy/use any artists’ work, it is illegal.

Liana Yarckin
Welcome to my blog! Liana Yarckin Artist exists because it’s fun. It is truly rewarding and fulfilling to interact with my collectors and followers. The number one response from others is that they feel good when they see my posts or my work. This has been the inspiration to continue to do shows and share my work on social media. The goal is to be able to do this in a happy, relaxed way so that each project can be thoroughly enjoyed by all parties involved. Thanks to my husband's encouragement, I have been painting for the last 17 years. My aunt is the one who first taught me how much water to put on the brush. Since then, art has always been intwined in my career path. Please visit me on facebook or my website to see my work collectively. All rights to the paintings are owned by the artist, Liana Yarckin. If you would like to use an image please contact me.

Promote Your Page Too